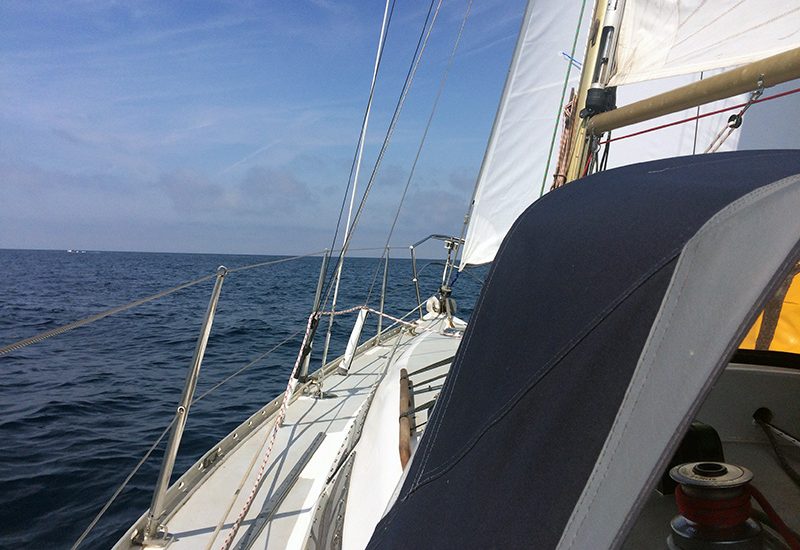 After repairing our rudder we went back to the marina of Port-Saint-Louis. We had to wait for the mistral to quiet down before we could head out to sea. In the evening we had an unexpected Danish party with Hans and Karen, and Carl and Pia (fest var meget hygge). The next days we got to know our new neighbors Maarten and Hanneke, a couple from Leiden sailing a classic Hallberg-Rassy named Marlijn. They were on their way back to the Netherlands after several years of sailing in the Med. They gave us plenty of good advice, some nice pillows for our cockpit and an anchor windlass (very generous gifts!). The pillows fit perfectly with our boat and the windlass will come in handy as we plan to anchor as much as possible. Maarten also helped Thijs to hoist Sarah up the mast. We hope to see them again in Leiden.

When the mistral settled down it was finally time to go! We left in the morning and Trinakria, the beautiful three-mast schooner moored in Port-Saint-Louis quickly caught up with us. It was wonderful to see this classic ship sail. As soon as we left the bay we stopped the engine and unfurled our sails – such a great feeling to move through water with the sound of the wind and waves only after hearing the diesel engine run continuously when we were on the canals. Our first destination was the islands of Frioul. Halfway through the Thresoor showed up on our chart plotter (thanks AIS!). Louis called us on the VHF to say hi.

The marina of Frioul was not very crowded and from our berth we had a beautiful view on the château d’If and Marseille. We left the next day for Bandol, a very touristic place. The marina is one of the largest in France and is lined among others with pointus, colorful traditional fishing boats, a sight worth seeing. From there we went to Porquerolles where we anchored for two nights in the baie de l’Alycastre where we enjoyed the good life: snorkeling, swimming, rowing our dinghy to the beach and walking on the island.

Our next stop was Fréjus where we stayed in a quite pleasant marina. We had lunch with Vincent (Sarah’s brother) and spent the afternoon on the beach. Just when we were dying of heat later on in our cockpit we were rescued by our friendly English neighbors who invited us on their very comfortable yacht Viva (with an ice cube machine and twin airco). Cold is indeed a luxury.

After two nights in Fréjus we sailed to île Sainte-Marguerite, a special place for us as it is the place where the idea of traveling on a sailboat was born. We then planned to anchor in cap d’Antibes, but when we noticed that the bay was not sheltered from the wind and waves we decided  to continue to Saint-Laurent-du-Var to meet up with Sarah’s parents and wait for favorable conditions to cross to Corsica.

The French Mediterranean coast – some numbers:

4 Replies to “The French coast”