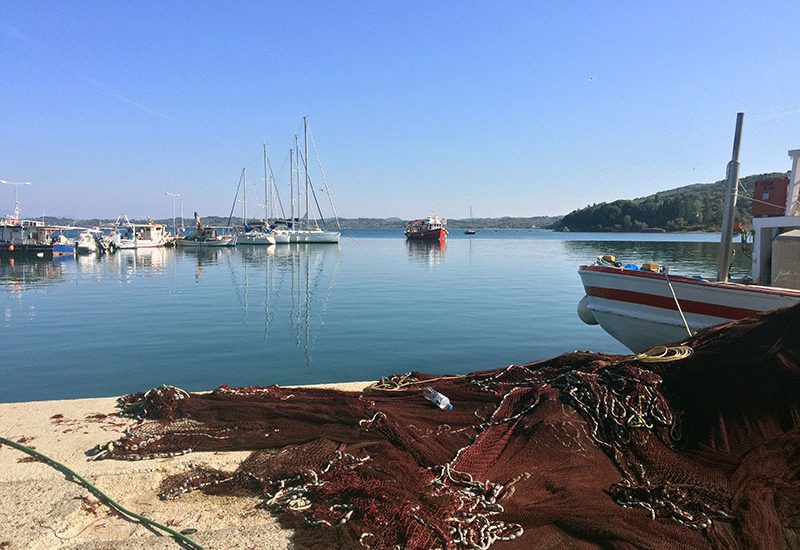 We celebrated our arrival in Greece (after 5 months of sailing and 2480 NM/4600 km) with a dinner in one of the tavernas close to our anchorage. End of season was getting close as only a few people were eating out in the tavernas. At some point during dinner an English couple arrived and sat at the table next to us. Just at that moment our dear Varne decided to rock a bit more (there was a bit of swell) and the couple wondered who was crazy enough to anchor while you could moor for free at the harbor. We couldn’t help but tell them that the boat was ours so we were the crazy people they were concerned about. We had a little chat together and when it was time to leave we exchanged cards. The couple was called Mike and Jayne and they cruise with a Hanse 370 named Dawn Rose. The next day we decided to stay in Othoni and visit a bit the island by foot. We didn’t get very far as it takes a couple of hours to reach the other side of the island and we didn’t take any water or hiking shoes with us. We still had a very pleasant walk. According to popular belief in ancient times Othoni was called Ogygia and was the island of the nymph Calypso with whom Odysseus fell in love. Odysseus stayed seven years on the island which is not bad at all as Othoni is absolutely beautiful. Even without nymph we could easily spend seven years on this island. We met Peter and Elisabeth, an Austrian couple that we saw before in Le Castella, and had a cup of coffee with them. We didn’t know they were heading the same way as we were. There are far more cats than people on Othoni, and we really had to resist the urge of getting one on board as a ship’s cat. Even if they’re very sweet and beautiful cats, they have a much better (albeit most likely shorter) life there than as a ship’s cat on a 27 ft sailing yacht. Othoni is paradise, also for stray cats.

We had the idea of stopping at Erikoussa (a tiny island about 10 NM away from Othoni) before sailing to Corfu but the weather didn’t cooperate (the anchorage would be totally unsheltered from the waves) so we sailed at once to Corfu. We stopped on the north coast in front of a large and rather pretty beach for the night. We then headed to Kassiopi to celebrate Thijs’ birthday. Kassiopi is a small and cute but touristic place (90% of the tourists seemed to be English). We went to the harbor and had to moor the Greek way for the first time. Luckily there was almost no wind and our future neighbors were on the quay ready to take our lines. They also invited us onboard (it was Thijs’ birthday after all) and had lunch with them. We thus got to know Wayne and Cha who managed to retire at 40 and now spend most of their time living on their boat, a Westerly 34 named Eclipse. We knew some bad weather was forecast for the following days so we sailed to Kalami, a bay on the east coast that seemed well sheltered from the NW wind. Kalami is home to writer Laurence Durrell’s fisherman’s cottage, the “White House” where he wrote ‘Prospero’s Cell’. Kalami is well known in the UK since they recently made a TV series about the Durrells. While we were anchored there an English gentleman who was swimming close by came to us and asked “Isn’t this boat a Varne 27?”. We were completely flabbergasted as it was the first time someone identified our boat correctly. To be fair he was a boat builder so that must have helped. Wayne and Cha also joined us there a day later. We stayed anchored for a couple of days, spending time with Wayne and Cha until the weather was good again.

When we sailed out of the bay we noticed a familiar looking boat and met Peter and Elisabeth for the 3rd time. (Peter and Elisabeth, we lost your e-mail address, so if you read this send us an e-mail!). We then sailed straight to Port Mandraki in Corfu (the city), to get some water and electricity and also get our DEKPA (permit to cruise in Greece). The port police is located at the end of the commercial harbor, so we walked about 30 min to get there and have our DEKPA done, or so we thought. When we finally found the right person she told us that we first had to pay for the DEKPA at the tax office (located downtown about 2 km away from the port police). It was Friday and the tax office closes at 2 pm (or something like that) so we had to wait till Monday morning to visit the tax office. In the meantime we visited Corfu town and spent hours walking in the old streets. The architecture of the city comprises a rich blend of styles (mainly Venetian, French and English) and it’s recognized by UNESCO as a world heritage site. We really liked Corfu so we didn’t mind being “stuck” there. On Monday morning we went to the tax office. It was a big building and everything was written in Greek. We only knew we had to go on the 1st floor so we went there and after asking three different persons finally ended up at the right place. The tax office looked like a mixture between settings from the movies ‘Brazil’ and ‘Office Space’. We were expecting to have to camp there all day, but somehow we could get the form and pay for the DEKPA quite rapidly. We walked for the second time to the port police with our precious form and things went smoothly there too: Halcyon Days was finally legal in Greece! In the meantime we anchored in Ormos Garitsas, a big bay close to the airport. We first anchored in the south of the bay but after spending the night killing 56 mosquitoes and barely getting any sleep we moved to the north of the bay. Sarah was going to a wedding in France so Thijs spent a couple of days watching after the boat (read: protecting Halcyon Days from charter skippers that don’t know how much space you should keep between boats while anchoring) and enjoying Corfu.

The day after Sarah came back from France we sailed to Petriti, a small fishing village in the south east of Corfu island. We anchored next to the harbor and even if the sea was a bit fresh it was a delight to be able to swim again! We were able to fill our water tanks at Limnopoula the local family taverna, they even gave us some empty bottles so we could take some extra water. After anchoring for two nights in Petriti we left for the mainland of Greece. As the pilot says Petriti is one of these sleepy hollows you quickly develop an affection for.