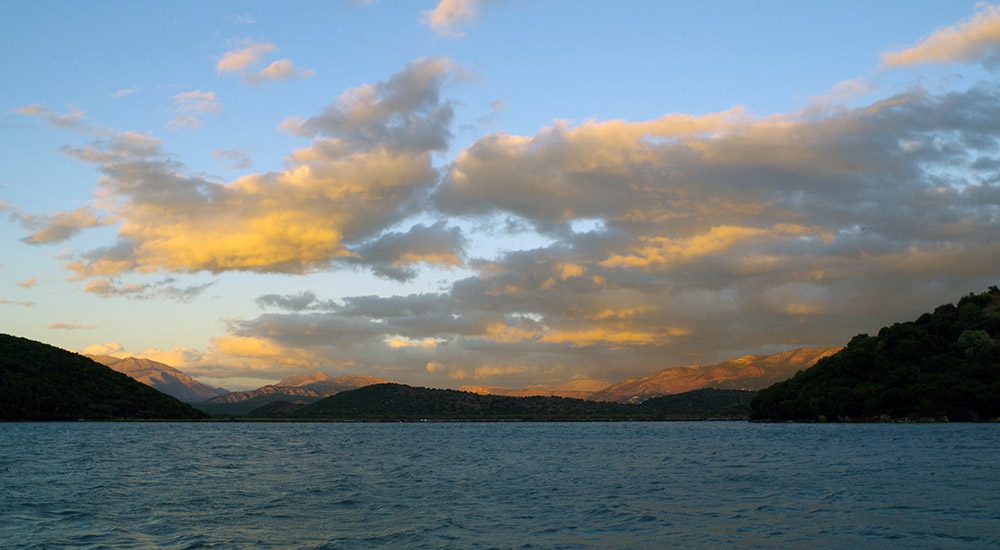 We left Corfu island for mainland Greece and immediately went for a sheltered spot called Igoumenitsa creek. It’s a lovely and wild bay with a view on the Albanian mountains, and a good place to weather the forecast Bora. We were alone when we arrived, but were joined shortly afterwards by a Dutch macho man and his sons who had to show off how good they could tack a boat length away from us. They left the next morning, with full sails, just before the Bora was starting to pick up. Weather forecasts are for pussies. We didn’t hear anything on channel 16 later on so they must have survived. In that morning, with 40 kts winds, our anchor dragged for the first time (!). We noticed in time that we were getting close to the rocks but it happened in minutes and we had to hurry to start the engine. We spent the rest of the day checking that the anchor was holding good and hoping the gale would subside at night (it did). The next day a few charter boats had the idea of anchoring in the bay, they put on quite a show. One of them managed to drag their anchor 4 times across the whole bay… We headed the next morning to Plataria, further south along the coast of mainland Greece. Just when we left the bay we realized we were missing our “dikke Bertha” (our big white ball fender). It must have fallen during the gale. We went back to our anchorage and luckily dikke Bertha was still there, on the rocky shore. Thijs heroically swam in the cold and murky water to retrieve our favorite fender. Plataria is a small village that must be quite lively in the summer but was already sleepy when we were there. We saw again one of the boats that was anchored next to us in Igoumenitsa creek (the only other boat that was not a charter boat) and decided to say hello. They were Tony and Raewyn from New Zealand, cruising the Med with their boat Wild Indigo. We could borrow their generator to charge our batteries and electronic devices, and we also had a very nice dinner together in one of the tavernas. Our next destination was Mourtos. We tried several anchorages indicated in the pilot before going to one that was not indicated anywhere but at least had sand on the bottom and was not ridiculously deep.

From Mourtos we sailed to Paxos island. Our first stop-over was Lakka in the North of the island. We anchored in a beautiful bay with amazing blue water. Despite the fact that it was already October the bay was still full with charter boats. The weather was super nice as well. Thijs went free diving and we also visited the tiny and cute village. From there we sailed on to Gaios, the main city of Paxos. We decided to anchor south of Agios Nikolas and were once again the only ones there. Gaios is also a nice city. It reminded us a little bit of Corfu. The next day we went for a day trip to Antipaxos, the tiny island just below Paxos. We anchored in one of the bays in the North of the island. The water was incredibly blue there as well and when snorkeling we could see lots of (tasty) fishes. We went back to Paxos and anchored in a more sheltered spot called Mongonisi. There was only one other Dutch boat there, a beautiful ketch rigged sailing yacht. We couldn’t agree on what kind of boat it was, so we asked them when they where about to leave. It turned out to be an Amel, ‘and you’re sailing a beautiful Varne’, the second time someone identified our boat correctly.

The weather was still nice so we went back to the mainland and stopped in Parga. It was a nice surprise. The city is super cute and it has a Venetian castle ruin that you can visit for free. Apperently the Greek authorities don’t really see the value of the castle for tourism so the only thing they did with it was put signs everywhere saying the visit is at your own risk. It makes sense since the castle is not really maintained and we felt more like Indiana Jones exploring the temple of doom than a tourist visiting Versailles. From the the castle you can enjoy a view on the city and on the big bay south of the city where we were anchored. We’ve really been enjoying Greece so far: beautiful scenery, nice people, cheap souvlakis and free harbors!