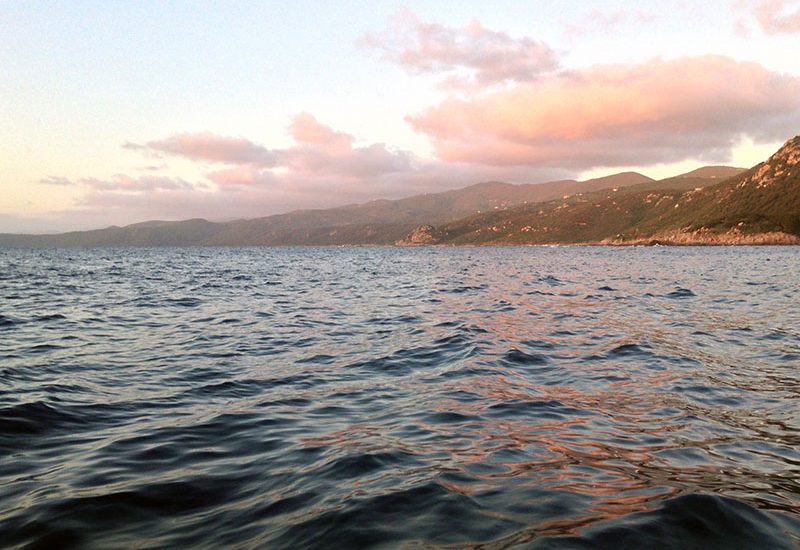 Our Corsican journey started in Saleccia, west of Saint Florent and in the desert of the Agriates. Saleccia has many pluses on its side: the beach is crowded during the day but empty at night, there’s enough space to anchor, there’s white sand, clear blue water, and wild landscapes around it. We stayed there for two nights to get some rest, swim and snorkel. For those traveling on a small budget like us, Corsica is ideal as there are so many creeks, bays and beaches where it’s possible to anchor. The only downside is to arrive early enough to find a space in high season, since the whole coast becomes crowded with charter boats. The good side is, it’s often entertaining to watch charter boats trying to anchor (the Italian ones in particular have developed a technique consisting of going forward while dropping the anchor) or trying to set the anchor light at night (nope, it’s not the steam light or the tricolor).

From Saleccia we went on to anchor in the gulf of Calvi for two nights. The marina claimed there was no space and we had to call again in the afternoon, however a visit of the harbor showed us otherwise. Victims of small boat discrimination, we rowed up and down a few times with our dinghy to the closest camping and filled our water jerrycans there. In Calvi we met in real life Thomas and Evelien, a young German-Dutch couple cruising the Med with their Sigma 41 named Scehawk. They previously found us through our Instagram account (social media does work to meet people every now and then!). From Calvi we sailed to Girolata, passing the marine reserve of the Scandola on the way. Girolata is a small village only accessible by boat and we felt a bit like time had frozen there. We left Girolata the next day for Ficajola, a small but beautiful beach with sand, grass, rocks and super clear water. When we arrived there in the afternoon no other boat was anchored but we were quickly joined by a few other boats. One of these boats was a big catamaran that got pretty close to us while trying to anchor. The French couple onboard apologized and invited us for a drink. We naturally accepted and got to know Guy and Dominique. Every year they spend 4 months cruising on their self-sufficient catamaran, often with the company of their children and grandchildren. It was the first time we visited a modern catamaran, and we understand why families like them (space anyone?). Guy and Dominique nicely offered to use their shower and to refill our water jerrycan (they have a freshwater maker onboard, a dream for us!). They left the next day for Ajaccio, while we left for Cargese but not before meeting the Scehawk again for coffee. We anchored next to the marina of Cargese, visited the city (steep climb but worth it) and bought some groceries too. We then crossed the gulf of Sagone and anchored in the anse de la Figuera, another pretty place with super clear water. From there we sailed on to Ajaccio, stopping in the Iles Sanguinaires for lunch. Mooring in the marina of Ajaccio was quite a pain, but in the end we managed to get Halcyon Days in its spot. Thomas and Evelien were already in Ajaccio and moored not very far from us. We stayed in Ajaccio one night only and set sails the next day for the anse de Cacalu just before the cape of Muro, an anchorage spot relatively well sheltered from the western winds as well as an aquarium (we didn’t even need to snorkel to see tons of fishes). We waited there for the western swell to decrease a little bit and after two nights left for the beach of Campomoro. We were quite unpleasantly surprised to see that 40 boats were already anchored there, but we could find a spot a bit further away. The next day we stopped in Tizzano, we arrived early enough to be able to anchor but in the evening the whole bay was full of charter boats. We wanted to sail from Tizzano to Bonifacio at once, but Beaufort 7 headwinds convinced us to seek shelter in the cala di Furnellu (in case you wonder, a very pretty beach with white sand and clear water). The next day we finally reached Bonifacio and arrived early enough to have a berth in the marina. Bonifacio is built on a calanque and has the most impressive citadel we’ve seen in Corsica. We met Martje and Frans in the marina of Bonifacio, a Dutch couple sailing a Contest 43 named Aveline, who invited us for a drink and gave us the Greek waters pilot, a very nice and useful gift!

In the end we spent over two weeks in Corsica. Time went so fast that we almost have the feeling of not having visited Corsica at all. It’s a beautiful island and we didn’t even get to see the East coast. We will definitely go back to Corsica one day.